Tamales are widely eaten in Latin America. Each country has its own version or versions of tamales. This tamale pie recipe is an easy version of that. In Latin America, corn masa (dough) is used to make tamales. Fresh corn is ground in a special mill to make “masa” or “dough.”

This dough is mixed with spices, meats, and sauces, wrapped in corn husks or banana leaves, and steamed. 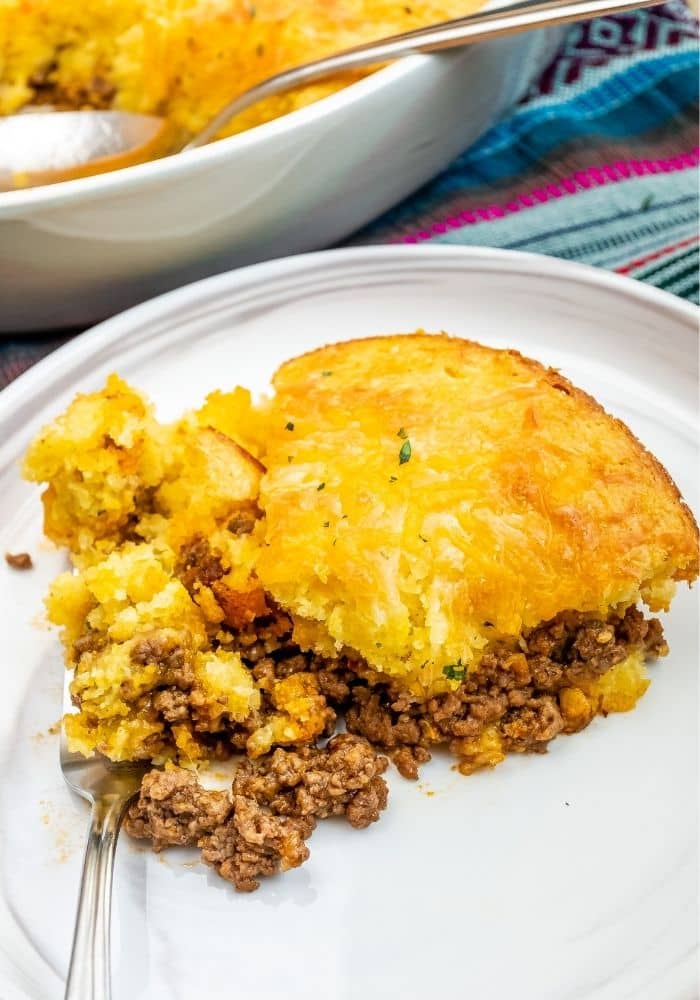 What Is Tamale Pie?

It is called a pie because it is baked in a casserole dish with layers, but it is not truly a pie.

Tamales are usually made with corn “masa” wrapped in corn husks or banana leaves and steamed until the masa becomes solid.

They can be stuffed with different kinds of prepared meats. This recipe is the closest thing to a tamale without making masa or using leaves to wrap it.

Corn muffin mix is used for convenience, and ground beef with enchilada sauce is the “stuffing” layer. So you could say this is a “layered tamale pie.” 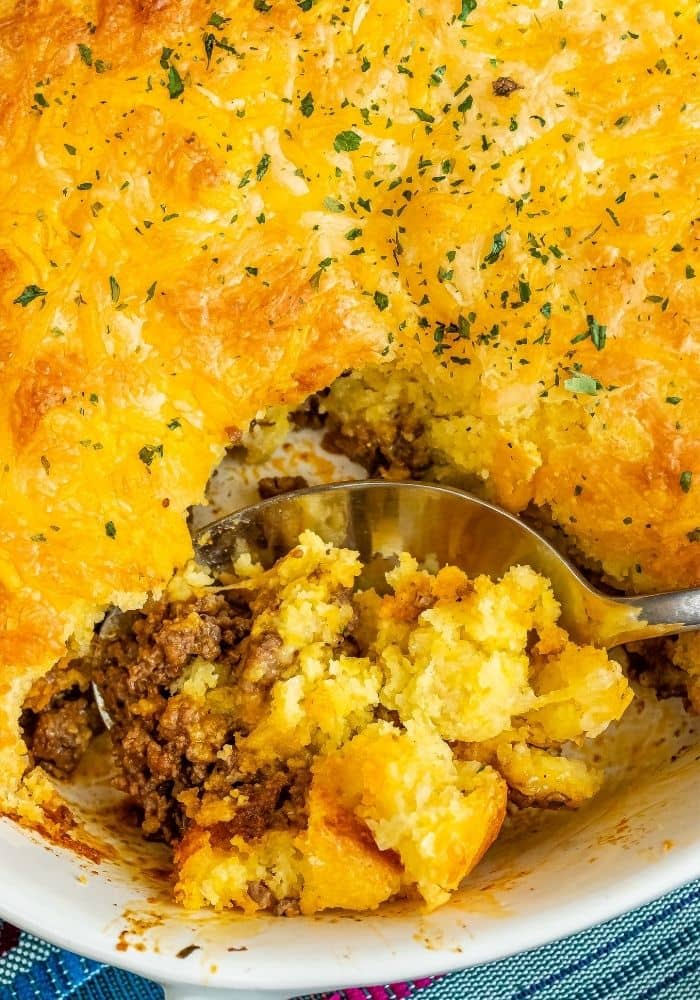 How To Make Tamale Pie 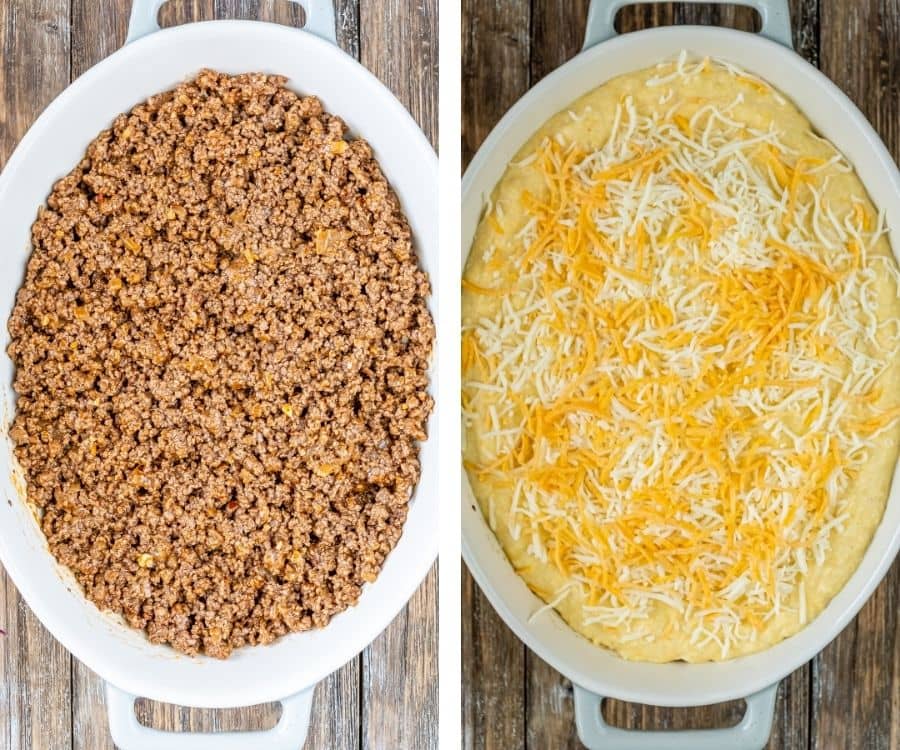 What To Serve With Tamale Pie?

This dish has almost everything a complete meal is supposed to have. It has meat, it has dairy, it has corn, but it lacks fresh veggies.

So I would definitely serve this tamale pie with a side salad such as The perfect tossed salad, or maybe something a little less complicated but full of flavor like our Cucumber and Tomato Salad, which goes so great with the Mexican vibe of this amazing pie.

So while your pie is baking, all you need to do is make one of these quick and easy salads, and you have yourself a killer meal.

Store any leftovers in an airtight container and put them in the fridge for up to 4 days and in the freezer for three months.

Remember to write the date before freezing the leftovers so you don’t overextend on the allowed freezing time. 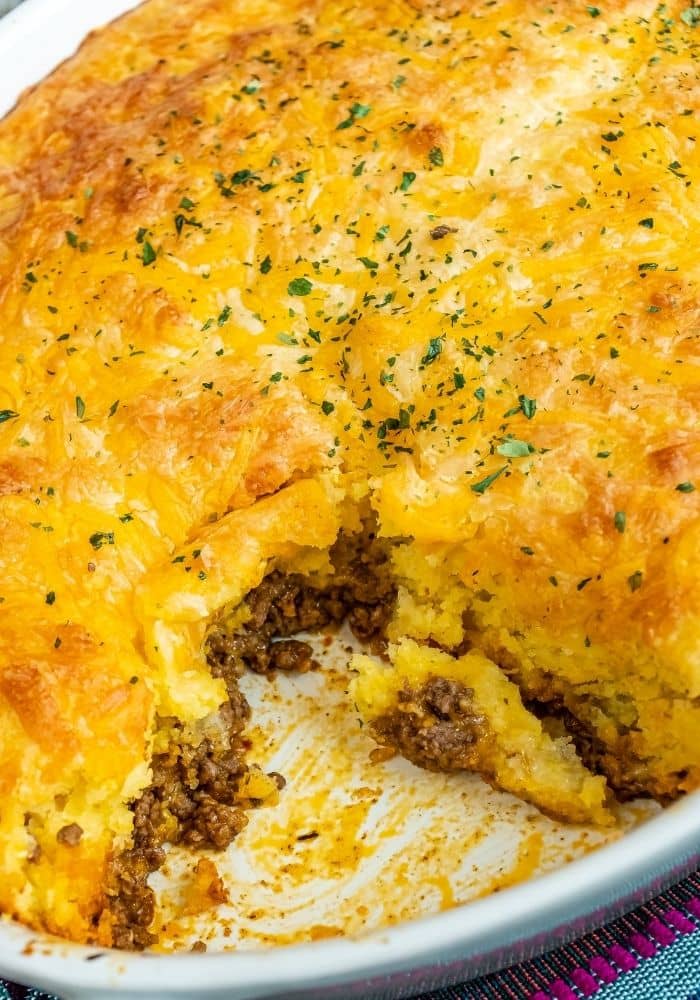 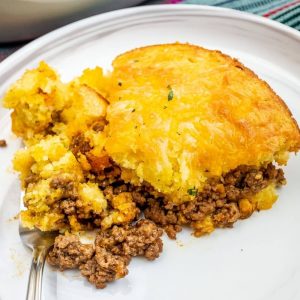 Definitely, any of these two ground types of meat would cut the calorie amount, so if you’re watching calories, this is the way to go.

You can substitute the meat with lentils and black beans. Instead of Greek yogurt, try using coconut yogurt or coconut cream, and do not use the egg. You will have to avoid the cheese as well if you are vegan.