When my vegan friends come over, I usually make some version of grilled veggies or mushrooms. This time, it was the combination of the two, which resulted in these vegan potato cakes stuffed with sautéed mushrooms. 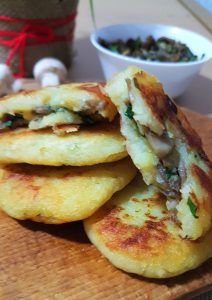 The reaction of my vegan friends? A total excitement! The outside crunchiness of these fried potato cakes and the inside softness coming from its mushroom stuffing happened to be an awesome combination for most perfect vegan bites.

So, last night’s dinner was a time when my non-vegan friends wished they had signed up for a vegan option, too! 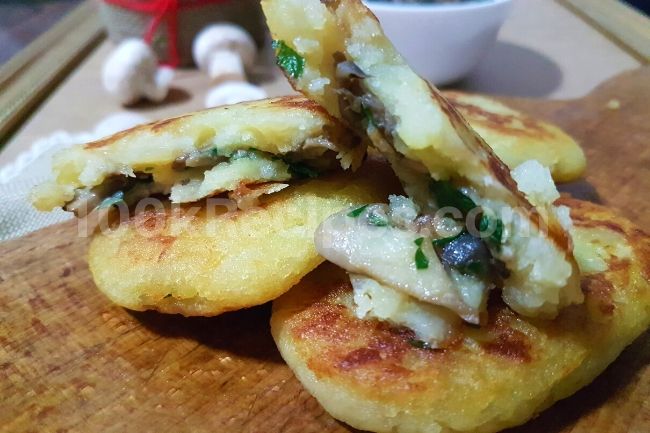 These vegan potato cakes can be made with leftover mashed potatoes, or if you always end up eating all of your mashed potatoes – just mash some specifically for this recipe. You won’t regret it.

If you are using some leftover mashed potatoes, make sure they are not too liquid. But if so, mix in some flour and they will be just right for shaping into potato cakes.

Vegan potato cakes are best when stuffed with mushrooms, but if that’s just too messy for you, you can also mix everything together and make some cakes out of the mixture. It will taste great, too!

As for the herby ingredient, I used parsley, but dill or rosemary would go perfectly here, too. 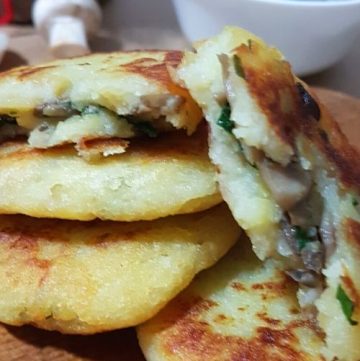